Hashtags are pretty much a permanent feature on the Internet now. We use them on social networks, and even on sites where they don’t work the way they were intended. That is just a part of the overall appeal… they have multiple purposes, one purpose decided through popular culture and the way users decided they wanted to apply it.

While being around for ages, Instagram seems to really pick up in marketing circles only now. If you are using Instagram for your business, embracing the solid hashtagging strategy is a must.

Let’s take a detailed look into hashtags, and how they work there.

For the uninitiated, hashtags are a way of grouping together posts to make them easily search-able, or bring up other posts that include it. If you click on a hashtag on Twitter or Google Plus, for example, you will bring up recent posts that have used the same one. This helps improve the chances of a hashtag going viral.

When a hashtag does reach viral status, it can become the face of a brand, campaign or event. This makes it an extremely important marketing tool, and so has made waves in certain circles such as non-profits. They can use a hashtag to bring attention to a cause, like the recent #WhyIStayed campaign for domestic abuse.

Of course, this can backfire. So hashtags should be used carefully.

Where Did Hashtags Come From?

Many people credit Twitter with the original use of the hashtag, and it is true that it is the first time it was used int hat context. But the origin of mainstream use actually goes back to IRC, when the # symbol was used to create chat rooms.

When Twitter adopted the method, it was due to the need to give users a way to search for posts. Grouping them under hashtags was seen as a convenient way, thanks to the live search feature that was unique to the microblogging platform.

Since then, it is used for its original purpose, as well as to provide context and asides in conversations.

For Instagram, hashtags are important. Being an image hosting site, it isn’t easy to find what you are looking for based on the image alone. Metadata will only get you so far.

To better narrow results, Instagram has text boxes that allow you to write descriptions that can include hashtags. This makes your pictures more likely to be seen by those looking for related content. By clicking on a hashtag, you generate multiple results of similar images.

Not only is this convenient for users, but for those who upload photos. Instagram has become hugely popular for brands, as a result.

Nike is doing a great job promoting their well-know #justdoit hashtag on instagram. 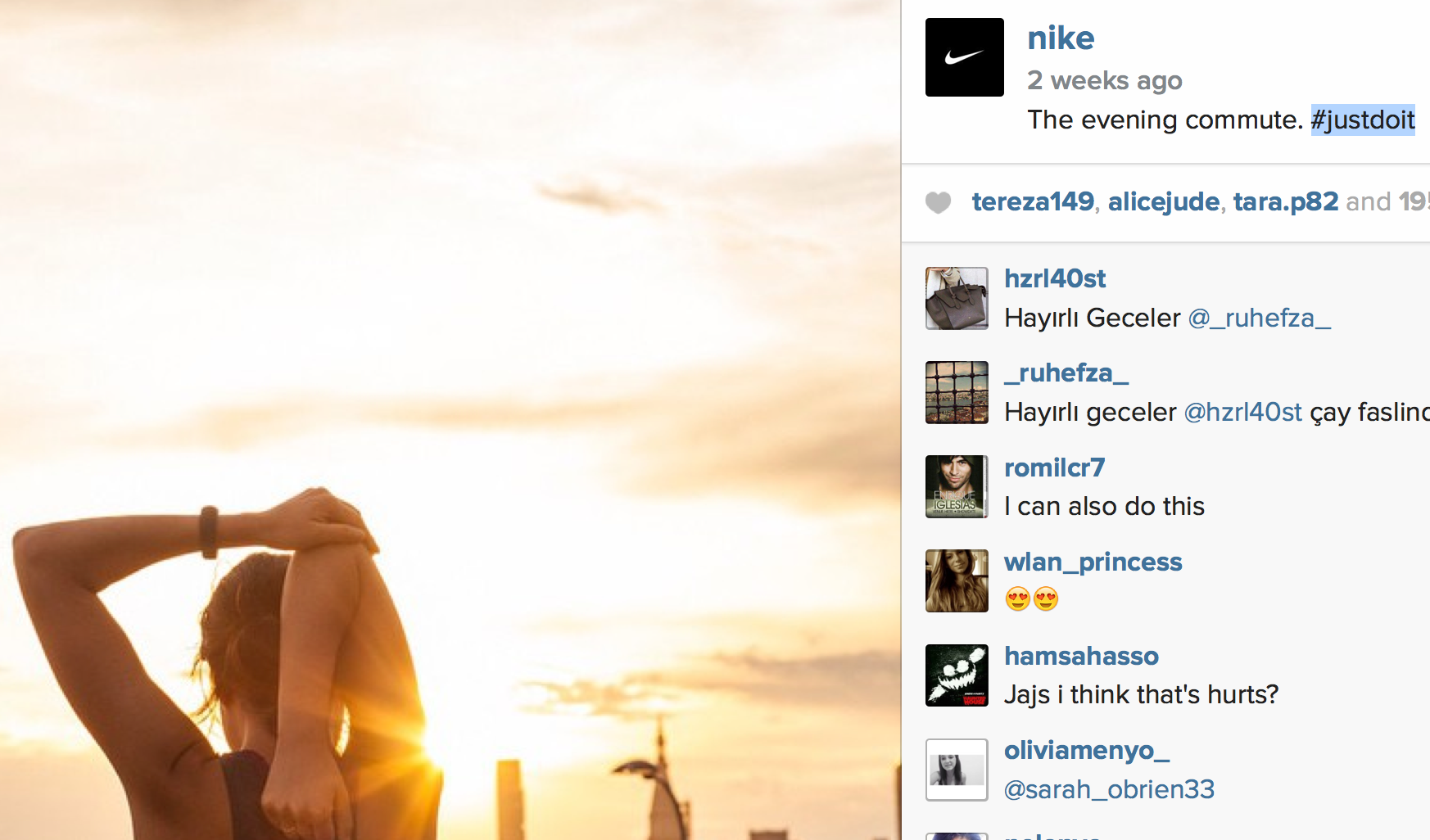 Unlike many brands, Nike doesn’t use their Instagram to create a look book of products. Instead, they try to inspire the viewer to be active. Sports and fitness photos dominate, and they end up being re-shared often. Including on other sites like Pinterest, where people choose to create inspiration boards of their own. 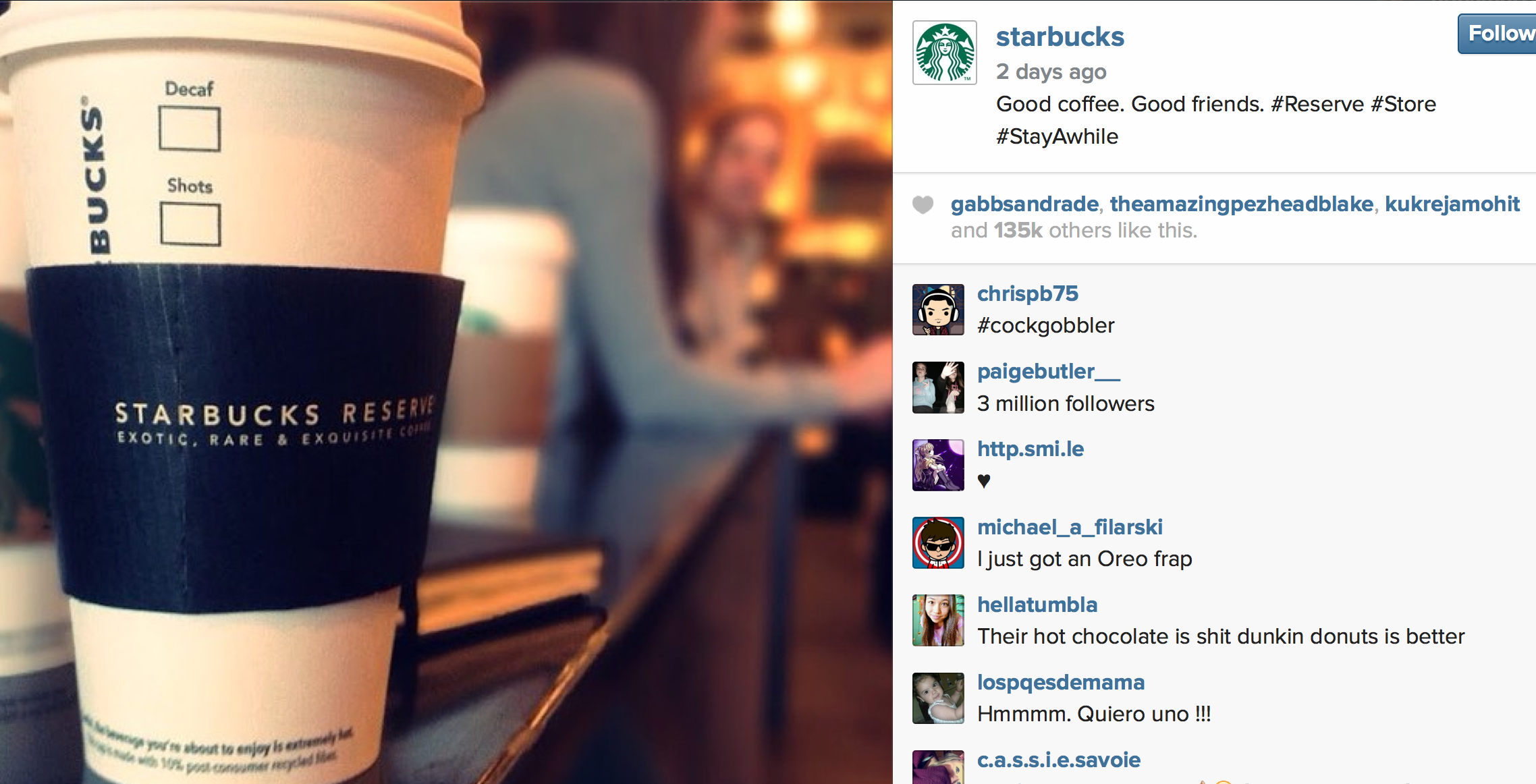 Yep, the ‘bucks has an Instagram page. They dedicate it to shots of their product in different situations, but always with the aim of making their coffee and other beverages look trendy and hip. Given the more than three million followers, it has paid off. Starbucks is one of the most popular accounts on Instagram.

Unsurprisingly, the fashion industry is one that benefits the most from Instagram. They can create elaborate photo campaigns with new lines, fashion shows, and more. Louboutin has a heavily engaged fanbase there, and their images are shared almost constantly.

Audi’s sleek photos of their high end cars have always been a hit on Instagram. But lately, they have been incorporating more videos. A medium that too many brands neglect, much to their own detriment.

Hashtags are everywhere, and they are here to stay. What are some tips you have to better use them on Instagram? We would love to know, so leave them in the comments!