Social media is more than just a lot of fun. It has literally changed the way we communicate, giving us a new platform with its own set of etiquette, limitations and overall conduct. We can meet people we never would have known, speak to friends and family in an instant from anywhere in the world and even connect to entertainment or commercial brands we would not have known about. The applications for small businesses and independent projects have been especially intense.

But has anyone else noticed how annoying notifications are? It doesn’t matter if you are using Facebook, Twitter or Google+, the system never seems to work exactly right. I know that I miss a lot of responses and feedback, simply because the notifications don’t read on certain pages. Making me miss out on what could have been a really interesting conversation.

The good news is that there are apps out there that allow you to catch those comments and read them all in one place. Which means no more going from platform to platform and hunting down your replies in giant threads to figure out if anyone spoke back to you. Isn’t that cool?

While I have heard of multiple programs that do this, I have only ever used two myself.

The best way I can describe the interface of this program is a Gmail inbox. It isn’t exactly the same, but it has a lot of similarities that remind me of one. The overall layout is very close to that email service, and so is the way it opens. It will even bunch multiple comments from one person together, with a mention of how many replies are located before you open it up.

As for organization, the folders work in the same way. You have the main inbox, and then priority and an important folder, respectively. Then starred, sent, archive and a contacts page for managing who you know from each social media site.

In addition to reading messages that connect from different social media services, you can compose messages, as well. All from your inbox, which is a pretty cool feature. 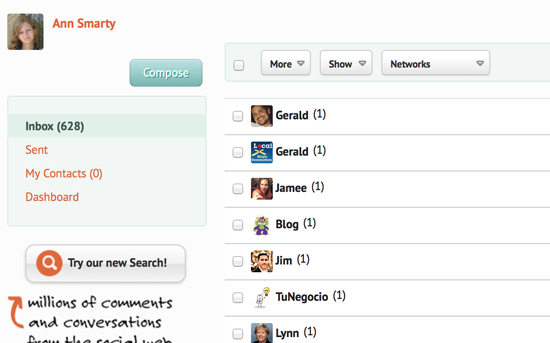 What I love most about this program is that they have a Gmail extension for Chrome. Otherwise, the many compatible programs (Facebook, Twitter, LinkedIn, Google+, Flickr, Gmail, ect) is a great benefit to using Engagio.

Rather than an inbox, is functions like a social media dashboard. Though it does have an inbox section as well, used for notifications whenever you have a new message or activity somewhere on your accounts. You can compose messages and contact people through this inbox.

Otherwise, go to your dashboard to see the social media feeds of everyone you have followed. It should show them all, from each platform. The only annoying thing about this is that when you sign up, they will immediately add you to the follow list of nine people. Which you will have to manually remove if you don’t want them.

Some other cool features are the engagement portions of the dashboard. There is one box for websites where your friends are engaging. Then another one for articles where they are engaging. So you get to see where they have communicated around the web using their different social media sign ons. It is an interesting way to both find content to interest you, and to get a look into their own enjoyment, without the limitations of them having to like a Facebook page or post a link on Twitter.

Maybe in time the notification systems for different social media sites will be improved. Maybe they will even further link the different platforms for better cross-site communication between users. But until that day, these two helpful services can really get you past the little annoyances involved.