Who uses the internet, and for what? At what point does the age barrier begin to be clearly seen, and how can we use that to out advantage? It is an issue addressed in this interesting infographic from Business Week. The main positive of knowing the statistics of such questions is being armed with information, which can be applied to any number of areas. Such as understanding the etiquette of social media, and how to best behave on the many websites popping up all over the web.

I know what you are thinking: social media etiquette? Is there really such a thing? Yes, there is, and mostly it is common sense to the majority of us. But we all have that one person on our list that we know in real life, maybe who we went to school with or worked with at some point.

You know who I mean…the one constantly posting inappropriate rants, emo cries for attention or starting fights with their significant other in public. They are basically the equivalent of a couple screaming at one another in the middle of a grocery store parking lot.

Whether you are a professional or a casual user of social media, these eight infographics will help you work out how you should and should not act on these sites. 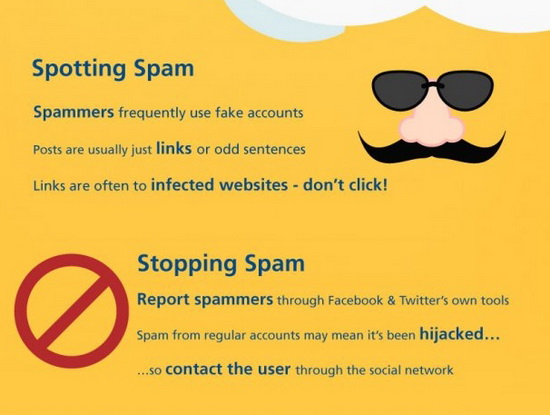 Have you ever heard of social spam? It isn’t just posts unrelated to anything being posted on sites, like blog comments by bots. We are seeing an increasing amount of it on Twitter, Facebook, Google+ and even Pinterest. The problem you might not know is that you could be contributing to the issue. This allows you to see the difference between self promotion and spamming, including for social users who might not realize their copy/paste responses to different pages could be violating the terms and service of some of these sites. 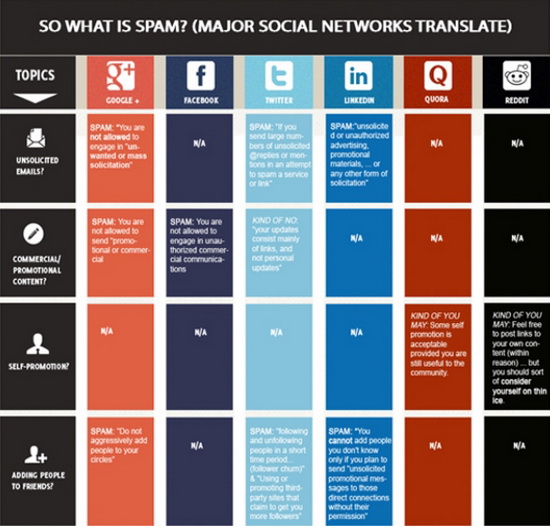 Maybe the problem isn’t your own actions; it could be the terms of service themselves. Social media sites have a very strict set of guidelines on what constitutes as spam, which has caused users quite a bit of trouble more than once. This chart gives a helpful rundown of most social media sites. From there, you can check and see what common posts are spam, and which you can get away with. 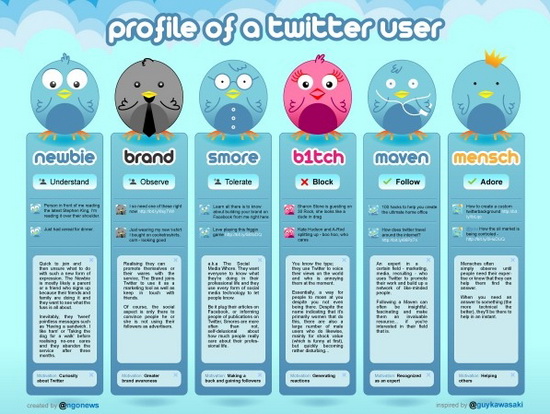 What kind of Twitter user are you? This infographic alleges that most will fall into one of six users, but more importantly that the people you witness on the site will be one of the six. They range from the innocent and eager newbie, to the helpful and positive influence of the mensch. If nothing else, this is sure to make you laugh as you find yourself recognizing people on Twitter who match them.

Have you ever wondered what motivates a user on Facebook to add or delete a friend from their list? This infographic explains, while breaking it down by gender. According to the chart, men are more likely to use social media for professional reasons, and women for creative. However, I would like to see a recent study on this fact and how it would be for other sites. Because I have certainly noticed just as many women professionally implementing social media.

Email, social media sites, message boards, instant messaging..this addresses all of them. It breaks down the proper way to address others through these platforms, with helpful tips that I know more than one person on my own list could use. Such as watching their spelling, turning off the caps lock button and searching out information before asking questions or posting things that might be incorrect. 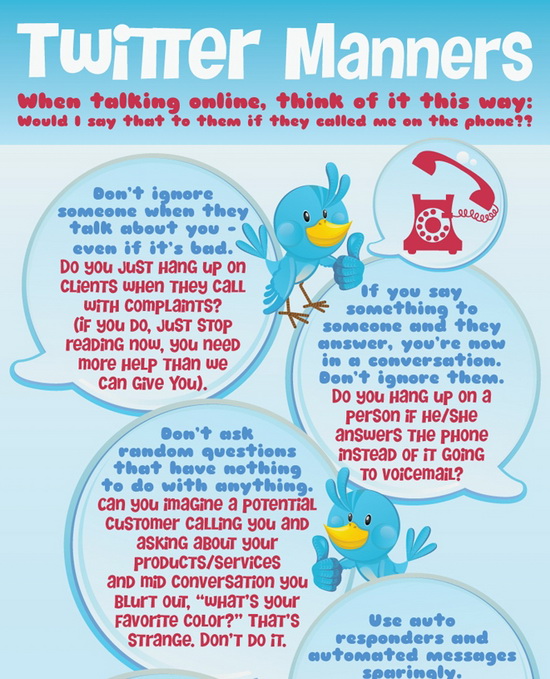 One of the golden rules of the web is: if you wouldn’t say it to someone’s face or over the phone, don’t say it. People are emboldened and often less inhibited over the web because they feel it provides some protection. But this is one of many bad habits that are addressed on this infographic about the proper manners on Twitter.

Not only is Pinterest a very new website, but it is a new social media format we haven’t really gotten used to yet. But there is already an etiquette emerging, and a general niceness that seems natural on the site. The problem usually falls to copyright infringement and original sources. Which is why it was some of what was spoken about in this infographic from the site itself.

8. How To Identify An Internet Troll 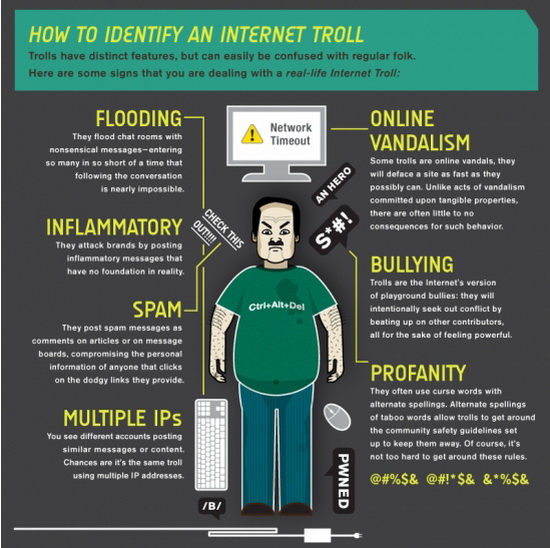 Oh, trolls…they are all over the web now, aren’t they? Usually people who want nothing more than to hide behind a screen and insult people for their own amusement, trolling is more annoying than anything else. But the adage “Don’t feed the trolls” often goes ignored by people who jump to outrage without employing critical thinking to find out whether they really are serious or just trying to get a rise. This infographic tells you how to spot one of these online antagonists.

Do you know of any other infographics on social media etiquette that we missed? Let us know in the comments, and be sure to provide a link!