Successful tweeters become so because they learn to carve out a following, big or small, using what works best for themselves. Part of that is through a solid engagement strategy, and through sharing relevant content. There are dozens of little things that count: Hashtags that increase the exposure of your tweet, the use of visual tweets, people your tweet is reaching at this very time.

With some platforms, such as Facebook and Google Plus, the timing isn’t so important. Twitter has the shortest lifespan of the update. You have a narrow window where your followers are most likely to see your posts, which limits the time that you can engage them.

Of course in most cases, natural tweeting just happens: You say what you want to say at this very moment without thinking too much about the time (inspiration-fueled tweets are always the best!) Besides, it’s advisable to re-share your most important update a few times (while keeping them original).

However knowing your most engaging time is great, especially if you are planning a digital asset and would love more Twitter exposure for it.

There are three ways you can easily establish a time window for your tweets.

Get The Right Tools

The first is the most obvious: get a tool that is going to give you the data you need to find when to tweet. Since the timing of tweets is so important to effectively using the platform, there are several options for you to choose from that have different approaches to the same goal.

Tweriod gives you an overall look at when you and your followers are both online in the greatest majority. So if you usually post around 9 AM, and most of your followers are on at 9 AM, it will establish that connection to give you a point on your timeline.

You can see the best times for posting on weekdays and weekends, or else look at specific times for each day. That is the most accurate way of finding your times, as some days are more active for your follower list than others.

While you don’t have to follow by every time, it will give you a blueprint to start you off. You should see almost immediate results.

ManageFlitter is another cool tool giving you the option to easily schedule tweets for your best time each day of the week.

It’s a good marketing habit to throw a few tweets in it each week (think of it as the Twitter editorial calendar which makes sure something is tweeted on your day, best time. ManageFlitter allows one tweet per day within the free account) 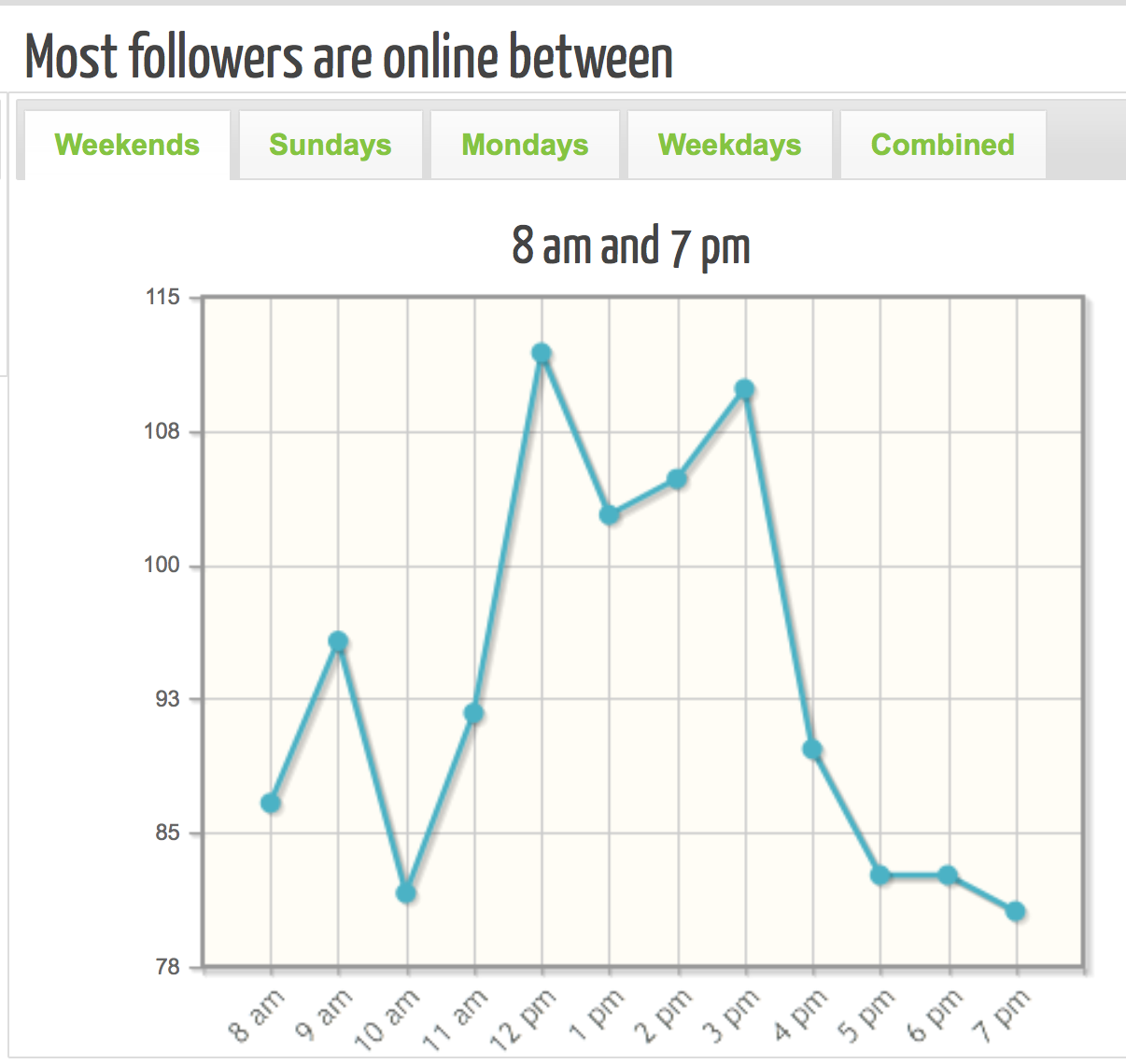 If you prefer, you can also do things the harder way. Using a social media dashboard, such as Hootsuite or Followerwonk, will let you see a large amount of analytic data from your account. You can get a view of what times the most popular posts are being published, as well as what kind of posts are gaining the most favs, retweets and comments.

Followerwonk has an additional feature that lets you schedule posts based on data from your account. You just analyze both your own followers and their followers, then put in how many posts you want to publish per day and click on the Schedule At Buffer button. Very helpful, and it sets the schedule for you immediately. All you have to do is put in the necessary content.

Use Geographic Location as a Benchmark

If you are targeting a primarily location based demographic, you can usually cater just to their time zone. But what if you want to actually find out where most of your followers and from, and then target them that way? Geographic location is an important factor in marketing, quite often. You will want to know where your followers are living.

There are two popular tools for this. The first is TweepsMap. It uses location as a primary focus for analyzing further data, such as competitor reach, and locations of those you follow. All of this is delivered through both an interactive map, and charts.

Twocation is a much simpler tool that only breaks down where the majority of your followers are coming from. You sign in through the map, select whether you want the information tweeted or not, and then get a look at which country most are located. Areas with a higher concentration of followers have darker colors.

Also, use WorldtimeBuddy to easily switch between timezones when targeting a certain area:

While it isn’t a popular or scientific method of finding tweeting times, just using common sense can get you pretty far. Ask yourself: who are my followers? What do they do? Why have they decided to follow me? The answers can help you to figure out when they are most likely to be on.

For example, let’s say your target demographic are professionals within the business world. When are people within that niche likely to be on? Probably sometime in the morning, such as between 8 AM and 9 AM as they have that first cup of coffee at their desk and are getting settled in. Then again around 12 PM and 1 PM as they are having lunch. Maybe around 4 PM and 5 PM as their work day is dying down and they are losing focus.

When you are also armed with information like where they are from, this can be further narrowed to their time zone. So you can start tweeting accordingly. This can be done with pretty much any group of people, and while it isn’t super targeted, it will at least give you a general idea. Which sometimes is all you can hope for, even if you are armed to the teeth with analytic data.

Finding the right time to tweet is often more of a fluke than a science. The tools above can help you out, and give you a bit of a blueprint to work from. But ultimately, trial and error is your best bet to finding what works for you, your followers, and ultimately your social goals. Whatever those might be.

Do you have any tips for narrowing down a tweeting time? Let us know in the comments!