How to Make the Most of Visual Tweets

In October, right before going public, Twitter got more visual: They started showing images and Vines in public timeline. Whether it was done to catch up with more visual social media networks (like Facebook and Google Plus) or in an effort to get more out of ads in the future, marketers can definitely learn to use that to their advantage.

Despite the assumptions that visual tweets might result in more views than clicks, the studies actually prove the opposite: Tweets with images result in more clicks, favorites and retweets, namely: Tweets with images get 18% more clicks, 89% more favorites and 150% more retweets (according to Buffer) and Tweets using pics are 94% more likely to be ReTweeted (according to Dan Zarrella)

A few weeks ago I wrote an article listing some of the ways to re-package your tweets to make sure you can tweet your article a few times over the course of a few weeks for more exposure without cluttering your stream with the same tweets.

With visual tweets you now have one more way to do that!

* Mind that Tweets with images cannot be scheduled (at least not if you are using Tweetdeck), so you need to find your own way to get organized. I, for example, keep an image on my desktop until it’s tweeted: This way I will never forget to tweet it!

Now, let’s see how we can use visual tweets wisely without overusing them:

Create “Tweetable” versions of your infographics and Slideshare decks

Infographics tend to be long but Twitter will only show a preview in the public timeline. So make sure to crop the most interesting / important part of the infographic for Twitter.

Note: Twitter timeline preview crops the image to roughly 437×219, so make the most of that real estate to make sure your followers are immediately hooked.

Tweeting your best slide from the Slideshare presentation is a great way to attract more attention to your visual content:

Get creative with quotes

I wrote on re-packaging quotes into visual content a while ago. Now that makes even more sense!

Tip: Get more creative by tagging a person who you “visually quoting” on Twitter to get his / her attention and interaction!

Make good use of screenshots

Marie Haynes does a great job tweeting graphs and screenshots. Who can pass by such a tweet without checking it out: 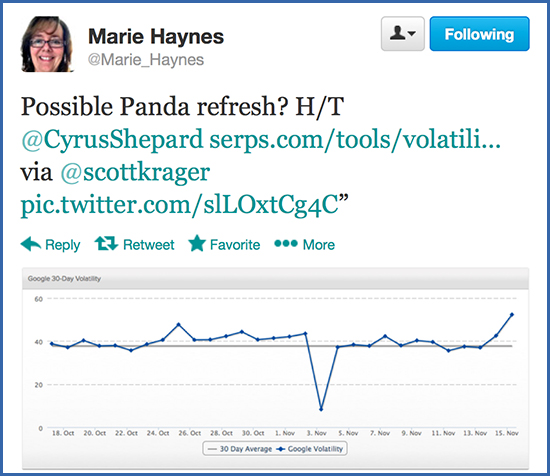 ** Screenshots are among the most non-intrusive ways to use visual tweets without coming off too “salesy” because screenshots do actually add value to any content!

Not everyone is actually excited by the change. Many of your followers might have enjoyed Twitter traditional minimal timeline (with nothing but text). Just because visual tweets seem to work better for interaction, don’t do too many of them (no-more-than-once-a-day is my own rule of thumb so far)!

I can totally see how visual tweets can benefit retailers (tweet visual coupons!), event marketers (tweet session photos), hashtag marketers (find creative and memorable way to put your hashtag on a photo!), you name it! However, tackling it with care (at least until your followers get used to images in timelines) is essential to avoid bad press and frustration.

Finally, check out this easy to use image search engine – Thudit – for more visual Twitter inspiration!