Later last year Twitter added custom timelines. The feature is not very obvious though because the only way to create a custom timeline is the desktop Twitter app called Tweetdeck. 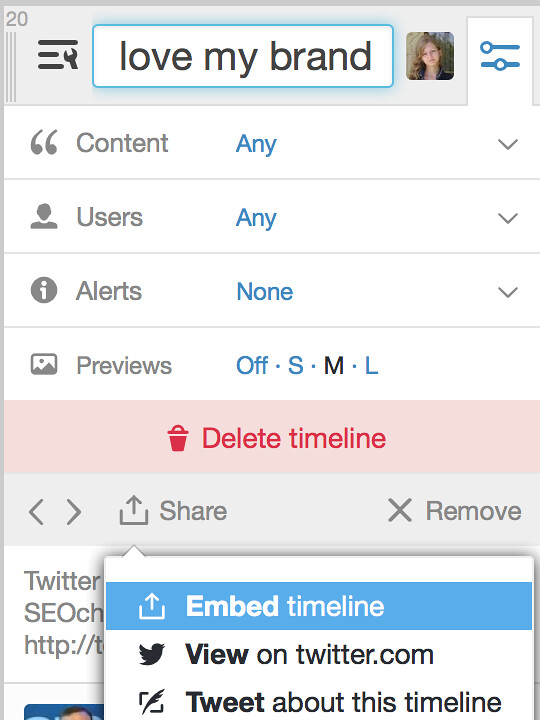 Collect and Publicize Positive Feedback about Your Brand

I’ll repeat this: The beauty of the three is that you can publicize the best of the best of your brand mentions while still being “believable” (Saying only part of the truth is not lying!)

Note the * in the chart above: The fact that custom timelines are NOT self-updating makes them the most controlled curation tool of all three. You are able to actually approve anything you are posting there.

Collect your product / tool positive mentions and embed the timeline to your testimonials page. Mind that you can also link to your timelines to give them more visibility.

Benefits: Show the people behind your brand, let your blog readers subscribe to all of them to turn your blog visitors into loyal brand advocates

Twitter Favorites have always been an almost extra feature of Twitter. I did notice many people (maybe marketers) started using the unloved start icon more often ever since it was announced it played some role in Twitter ranking search results. But more often than not there’s no a tangible benefit of adding Tweets to favorites (I usually prefer to retweet). favorites work great for controlled twitter curation.

A few months ago I shared a few ideas of how to use Twitter favorites.

Favorite all your positive brand mentions and publicize them via a Twitter widget or RSS feed. Twitter testimonials are so believable!