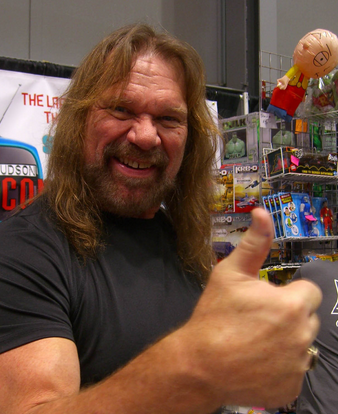 This past Sunday, Internet Marketing Ninjas stepped into the ring with WWE Hall of Famer “Hacksaw” Jim Duggan for a hard-hitting ‘Social Media Smackdown’.

Through a live-streamed event that engaged fans on both Twitter and YouTube, the inaugural Royal Rumble Winner gave analysis and thoughts on the big event, answered questions from fans from all over the world, and had fun giving away prizes to those who tuned in.

After the event, we unlaced our boots and sat down with the Hall of Famer; not to solely discuss Professional Wrestling, but to dive off of the top rope and into the world of Social Media.

IMN: We’re Social Media Ninjas – pure stealth and execution. You’re pretty active on Social Media yourself, particularly on Facebook and Twitter. Which is your favorite between the two and why?

IMN: Managing communities for clients from several different industries, we definitely receive our fair share of strange questions and comments from social media users. What’s the strangest thing that you can remember being asked on Facebook or Twitter?

IMN: Social Media has changed entertainment, television, and sports so much over the last handful of years. What’s been the biggest difference when comparing the world of Professional Wrestling at the height of the ‘Hulkamania’ era of the 1980s to now, due to the emergence of Social Media? What stands out?

Duggan: I think social media pulled the curtain back from wrestling. In the WWF days, the Golden Age, people still weren’t sure about it, how it went, before it was all out there on the internet, who was going to win, who was going to lose, and all of the storylines being scripted. “The Blade,” that was the big deal in the day; hide the juice. I think social media obviously pulled the curtain back on wrestling, and in that way hurt the business a little bit.

IMN: Who are some of your favorite people, both from the Wrestling world and outside of it that you enjoy following?

Duggan: I really don’t follow too many folks on social media. You know, Jake “the Snake,” Ted DiBiase, and Roddy Piper pretty much, God Bless him. I keep up with what those guys are doing, but even then, not that much. I know that I’ve got to get better at it.

IMN: You’ve said in the past that you want to surpass Jake “the Snake” Roberts in the amount of Twitter Followers. He’s ahead of you by about 100,000 right now. What’s your plan to pick up a Twitter victory over Jake, and could this lead to a match at WrestleMania XXXII in Dallas?

Duggan: Let me tell you somethin’, Jake “the Snake” Roberts….. “Hacksaw” Jim Duggan – I’m coming after you on this Twitter deal. I’ve got the Internet Marketing Ninjas on my back, and we’re comin’ for you, Tough Guy! Give me a “HOOOOO,” fellas! [HOOOOO!!!!]

For close to forty years, “Hacksaw” Jim Duggan has entertained fans all over the world, most notably with World Wrestling Entertainment (WWE) and World Championship Wrestling (WCW). Duggan was inducted into the WWE Hall of Fame in 2011 in Atlanta, Georgia, won the very first WWE Royal Rumble Match, and held both the WCW United States and Television Championships. Prior to battling legends like Hulk Hogan and Andre the Giant, Duggan played football at Southern Methodist University, and later spent time with the NFL’s Atlanta Falcons.

You can follow “Hacksaw” Jim Duggan on Twitter at @OfficialHacksaw. Also, be sure to check out his telling 240 page biography, Hacksaw: The Jim Duggan Story, available both in Hardcover and on Kindle.