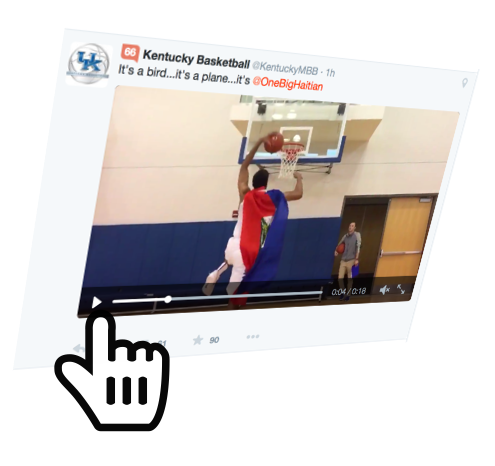 Twitter Video has been around for a while now. But it is still shockingly underutilized, probably because nobody is quite sure of how to best take advantage of it. Can such a casual feature really be applied to a strong social business strategy?

Branding has changed a lot in the past decade. The Internet – and social media in particular – have made adapting to a new kind of audience necessary. Your potential customers just expect something different now, something more personal and effortless. Or, at least it is supposed to seem effortless… we know the truth.

Twitter Video is a helpful tool for this purpose because you will be creating very simple clips and uploading them right to your account, no heavy editing, no gimmicks. The world of vlogging has shown that this can be immensely successful in connecting on a deeper level with viewers.

Twitter videos are getting even more important to marketers now that they are included in Twitter advertising options.

It is right in the name: it is a video feature that you upload directly through Twitter. Or, more specifically, through the Twitter mobile app.

You have two options: 1) you can record the video directly through Twitter and post it on your profile; 2) you can upload a video and post it that you have already taken through your smartphone.

All videos have to be 30-seconds or less. So we are talking very quick clips here. While that might not seem like a lot of time, consider the success of Vine videos. If you can built so much viewer loyalty within a couple of seconds, imagine what could be done in half a minute!

Limited editing is allowed, as well as drag and drop for organizing the clips to best reflect your brand needs. But if you want greater editing control you will have to download a video editing app, prepare your video clip there, then upload it from your gallery folder. Thus you can add watermark logos, for example.

But for off the cuff videos, which Twitter Video really encourages, the simple editing features should be plenty.

Now that you know what Twitter Video is, and how it works, how can you use it to enforce your brand? Here are some ideas.

You can actually be visual here! So why not do something that will amuse your audience? For example, show your face reacting to something trending or ridiculous. Actually physically enact hashtags, which usually they would just have to imagine.

Respond To a Trending Topic

Utilizing a trending hashtags always makes sense and for videos too! You can say a lot more in 30 seconds than you can in 120 characters. Which makes making your view on the issue known much easier, and what you post more valuable.

Have you ever had to send out several tweets to comment on a trending topic? Then had tiny pieces of it ignored, while others got a bunch of retweets? Or worst, had something taken out of context because it was broken down that way?

Videos will keep that from happening, and put all your thoughts in a cohesive narrative that is much more effective.

Starting today, you can pin a Tweet to your profile from iOS and Android. Go ahead, make a statement. 📌 pic.twitter.com/iK31aIsK6U

Educational clips are always very popular. You have 30 seconds in a video to show someone how to do something. That is way easier than you might think, and very helpful to your viewers. For example, you can capture yourself doing something that you would otherwise not be able to show them.

A great example of this came from a certain artist I follow on Twitter. They wanted to show how they start a drawing, and how different it is from the beginning point to the finished product. So they created three 30-second videos, one at each stage of the process.

You could see the real difference between the initial form sketches, to the messy middle sketches where everything was being slowly refined, to the final result and how those messy elements had been cleaned and polished.

By putting those three educational clips on their Twitter, they were able to quickly convey to new artists who might be frustrated that it is all about time and effort. No pieces of art were perfect from the beginning.

This Flappy Bird contest has something to do with journalism, I'm sure of it. #ONA15 pic.twitter.com/EH0FYo1NCd

Are you going to a conference or special event of some kind? Tweeting little moments and teasers can be a great way to generate hype. It may also be a way to connect to people who are also at the conference, and so improve your networking.

One strategy could be to do longer videos of conferences that will be edited and released later. Then take mini clips of the conference and expo hall, or even of people you will be interviewing for your videos, on Twitter Video.

These will whet people’s appetites for the real deal that will be released later, keeping them interested. This is a great method of live-tweeting that is being done more and more.

Say Thank You To Followers

Your followers deserve a little love, don’t they? This strategy has been used on other platforms, like YouTube, for awhile. For example, popular video vlogger Markiplier used to release a thank you video for every 5,000 subscriber he got on his YouTube channel.

Why not apply that same principle to Twitter Video? Every so often send out a tweeted clip thanking people for following your account. Maybe mention more active engagers by name. Make them feel special, and they will return the favor.

Twitter is the ultimate platform for direct influencer engagement. Being so open, making it easy to @tag people, and having a constant stream of trending hashtags often used by those influencers, networking is super simple. But you still have to break through all the noise.

Posting a video is a great way to talk to an influencer face to face. It direct attention, almost guarantees that they will watch it, and really connects with them. They are more likely to share it, because you can show your earnestness. It just feels more personal.

Try creating a video response instead of direct tweeting next time, then use tags and hashtags to enhance the content. The results will speak for themselves.

Twitter Videos is a feature that provides endless possibilities. It gives you an option to diversify your Twitter feed. And it’s so easy!

Have an idea? Share it in the comments below!