Search and Social: Scariest Moments of 2016 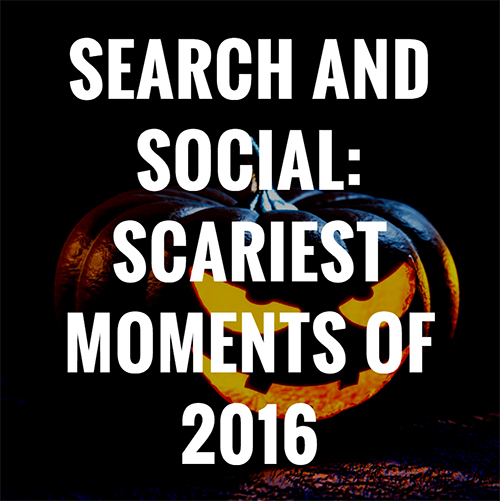 Happy Halloween! Has our industry scared you this year? have you lost sleep over some traffic dips or frightening rumor?

Here are a few of the scariest moments in search and social industry for the year of 2016:

Another “Phantom” 2016 Core Algorithm Update Was Not Panda

Everyone was waiting for either panda or Penguin to come, yet the unnamed algorithm scaring webmasters at the beginning of the year appeared to be neither.

Google sent a bunch of penalty warnings mostly to bloggers discouraging them from linking out to commercial websites.

…In general, when you’re getting a free product (or service, etc) in exchange for a post, you need to make sure that the links there are nofollowed — be it to the original product page, a sales page or affiliate link on a site like Amazon, or to their social media profiles. You don’t need to nofollow everything on your blog, just the links that are involved in an exchange like this. Obviously, it’s also good to disclose this kind of relationship to your readers too — on the page I was looking at, you did that already, but others might not be doing that.

A solid question here is of course:

If they can tell that a particular link is “supposed to be” nofollowed, why don’t they ### well just ignore the link?

The answer is simple: It’s a scary tactic to discourage webmasters from doing it in the future.

“It’s not just the fact that the same passwords may be used on other sites, but an e-mail address can give thieves pointers to other services, and, of course, help towards identity theft”

The rumor that Google is closing AdSense account resulted in quite a stir. Yet, it turned out to be a mild one.

Almost all the cancellations appeared to be either inactive accounts, hardly used accounts, or low volume traffic accounts – i.e. accounts that are pretty much useless to the ecosystem.

Facebook Changes its Algorithm to Put Friends Posts Above Publishers

Had you spent money to accumulate likes to your business page? Well, after that update, it turned out to be pretty useless. Now you had to pay to get your content in front of your followers anyway.

Google announced that it would downrank pages with intrusive popups in mobile search. LOTS of websites still run those: Here’s how to get prepared for the update.

Things Go From Bad to Worse for Keyword Planner:

Nothing new here but still confusing and scary: How to tell a “spammy” widget link from a well-deserved editorial widget link? The line can still be pretty blurred, can’t it?

Finally, Penguin came! It was the last to be announced, so embrace the no-Panda, no-Penguin era to come. Now, each time you see a traffic drop in Google Analytics, you’ll have to guess what it might be and there’s no one to confirm your fear!

Chrome to Target HTTP as Non-Secure

Google Chrome will start to warn the users of a non-secure page if there’s a login page on it. It’s going to be a major user experience issue, so you may need to switch to https as soon as possible.

Have I missed any search and social scary moments in 2016? Please share them in the comments and they will be added!