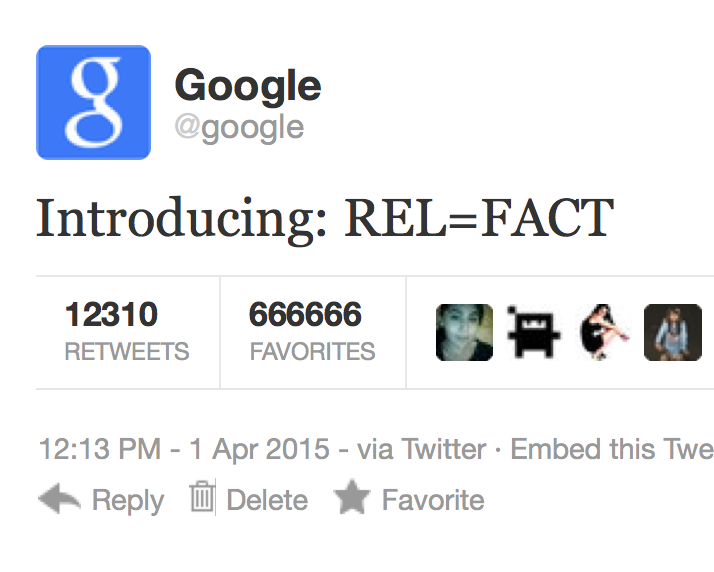 On the heels of a study testing a fact based approach to rankings known as Knowledge-Based Trust (KBT) Google is releasing additional news on this front. Even though the KBT concept is still in relative infancy, to give the idea a bit of a growth spurt, Google has unveiled a new attribute intended to help webmasters distinguish their fact based content for the Knowledge Vault.

The new tag rel=fact, has been introduced as a way to allow websites to inform Google that their information is incontrovertible truth.

One Google team member provides some context for the new attribute claiming “We, as a society, are pretty good about distinguishing fact from fiction and opinion from truth. This is just the next logical step in allowing webmasters to label their content as fact. ”

Some detractors have expressed concern that personal biases could infiltrate search results as a side effect of a Knowledge Based Trust algorithm. But Google employees aren’t worried about that at this point stating, “The KBT Algo won’t be used across all industries. Something like “Best Chinese Food” will never be subject to this mode of ranking. It’s far too subjective a topic. This is more for questions like ‘Who was the 27th president’ or ‘Are Vaccinations Dangerous?’”

It was also heavily implied that rel=fact is just the beginning of a host of new attributes that will provide website owners with a plethora of options for classifying the nature of their content appropriately. Though rel=fact may be the first readily implementable tag, the new ones on the horizon may include:

While it is easy to understand the appeal for Google to rank content based on factual accuracy the rel=fact attribute and its descendants, like any other markup, rely heavily on us to be conscientious of proper usage. Which shouldn’t be a problem right? People always know the difference between fact, fiction and an April Fool’s Day Joke.