How to Prevent Google from Thinking Your Name is a Misspelling? (Weekly Q&A) 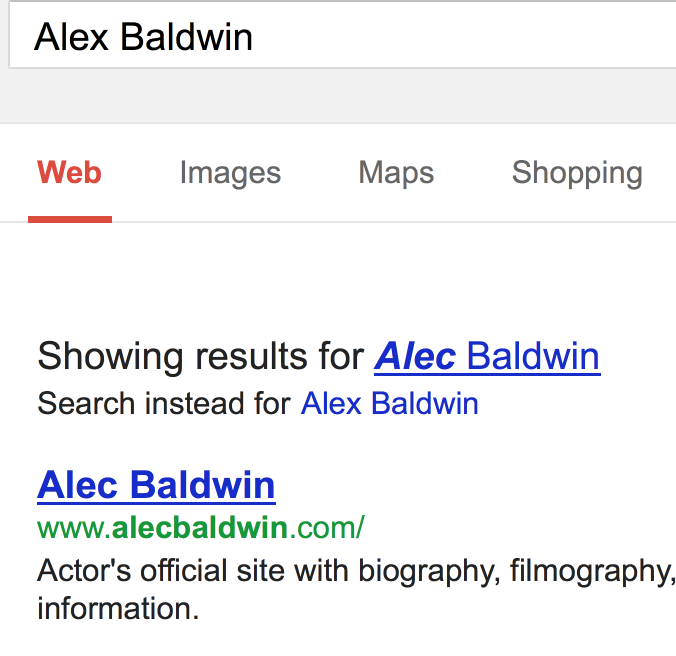 Google is the best search engine around (yes, I said that!). Sure, there are others that try to compete. Plus, there are those niche searches that fans will claim are better than the net’s largest corporation. But when it comes down to it, Google runs the web, in more ways than one. Which is why everyone is obsessed with ranking with them and not, for example, Bing.

One problem is that it is technically an automated service. Their algorithm can’t always work out the finer details in the way a person, with their critical thinking skills, could. Like when your name is similar to another name that is more common.

This is the problem that web and product designer Alex Baldwin ran into in 2011. As you can imagine, Google was autosuggesting his name as Alec Baldwin, and when you did a search for his real name it pushed down his ranking. It is the same issue that search engine Blekko ran into during their initial launch.

Google has a long history of integrating spell checking into its search results. Back in 2005 when Google was much more open about its technologies, there were a lot of threads explaining how spelling suggestions worked:

Essentially Google spell checking compares words entered against a constantly changing list of the most common searches and isolates when a user may have intended to enter a different word or words. Because it does not depend on a rigid dictionary, it is more effective in isolating words and phrases that may be commonly used but are often not included in formal dictionaries. However, the method of comparing words to a database in order to determine what a user may have intended, is similar to that of more traditional spell checkers.

“Google’s spell checking software automatically looks at your query and checks to see if you are using the most common version of a word’s spelling. If it calculates that you’re likely to generate more relevant search results with an alternative spelling, it will ask “Did you mean: (more common spelling)?”. Clicking on the suggested spelling will launch a Google search for that term. Because Google’s spell check is based on occurrences of all words on the Internet, it is able to suggest common spellings for proper nouns (names and places) that might not appear in a standard spell check program or dictionary.”

How To Get Past It?

Judging from the above, the only reliable way to get past your name being considered a misspelling is to get more people searching it. That is, get popular!

While I understand, it’s easier to say than to do, it’s worth trying to do other things:

2. You can also help the problem by using (branding) a different name. Not a random one, but perhaps a shortened or long version of your first name. Or you can use a middle initial to help differentiate you from the more common result term.

3. Finally, if you don’t mind spending a bit of cash, you can use adwords. Set up an account and use the Advanced Options setting Match Types. Here, you can set up parameters for your ad. Set this as your name, and filter out any similar results by telling your ad to exclude the other name or term. From there, you can put a small amount of cash into the account dedicated to clicks. The ad will show up as a featured result, while showing Google your name is correct.

Norton’s “Top Search” tool claims to be doing that for free but it’s only available for Northern Europeans now (last time I checked it was available for everyone, so maybe they’ll re-open it)

Of course, the most effective way to get Google to recognize your name as correct is to put yourself on their radar using basic visibility. The more known you are around the web, the more likely it is they will see your name and hold it as a different result.

What ways would you suggest getting past this dilemma? Let us know in the comments.