How to Boost Your Social Media Following With Expert and Influencer Quotes!

I would like to start this post off with, fittingly enough, one of many expert quotes about social media:

“Social media allows us to behave in ways that we are hardwired for in the first place – as humans. We can get frank recommendations from other humans instead of from faceless companies.”

An oversimplification, maybe, but a great way of looking at the social sphere online and gaining some perspective on the true scope of its worth.

Now how about a critical quote about social media?:

“Our social tools are not an improvement to modern society, they are a challenge to it.”

~ Clay Shirky, Here Comes Everybody: The Power of Organizing Without Organizations

Here we have two well informed, educated authorities on the topic of social media giving us their two competing theories about its place in modern society. Why did I include them here, right at the beginning of my post? Because I am a firm believer in the power of expert quotes

Why Expert Quotes Are Your Ticket To Better Engagement

I remember reading a news article about how a study found that people who post inspiration quotes on their social media page were more likely to be unintelligent. Unsurprisingly, these claims were false, but I still found it funny and shared the article to all of my friends. I am an avid quotes sharer, and so are many of them, and we all had a good laugh at our own expense.

Whatever the original intentions of that flawed study, there is no denying that experts quotes are insanely popular on social media, especially on Twitter, where a single quote will be passed around thousands of times.

Influencer marketing is on the rise. Being such a fantastic form of engagement, and a way to increase your visibility on social platforms, how can you start to really take advantage of it? There are a few ways.

Occasionally you will come across a great quote from one of your favorite blogs, or a video interview, and you should feel free to share those. But when you are actually going hunting for quotes, it is good to have a couple of sources on hand.

I am especially fond of Goodreads, where you can do a search by keyword, author or tag. That is where I found the two quotes posted at the beginning of this article, as a matter of fact.

Two other great quote sites are Best Quotes of the Day and Brainy Quote, both of which offer reliable original sources, and an extensive database. The latter has a Quote Of The Day feature that gives you a beautiful visual graphic with random quotes. Which brings me to…

Visual quotes are even more shareable than text ones, and as a rule you should try and create more of them. Luckily they aren’t that hard to make, especially if you have a little know-how on tools like Photoshop or GIMP.

If not, you can turn to generators like Recite (for simple graphics with a watermark), or Pixteller (for slightly more advanced). I tend to alternate between the two in order to get two different types of visual quote that attract two different kind of posters.

The first is great for straight quotes that are placed against basic backgrounds like a piece of paper and pen. They have little frills, and are popular in particular with older social media users. The second puts the quote against a more visually stimulating backdrop, like the type you might see on Tumblr, or even PostSecret. Obviously, those are very big with the younger crowd.

If you want to start making different kinds of graphics that use visual quotes (like infographics), check out Canva. Having absolutely zero graphic design talent or knowledge myself, I am a huge fan of this graphics generator. It is extremely easy to use, and offers a ton of templates to choose from. 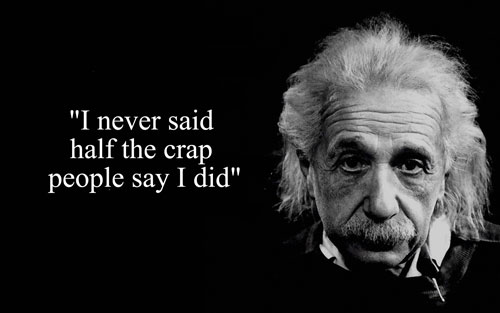 Have you seen those posts floating around that show Albert Einstein quoting Lil Wayne lyrics, or George Washington telling you not to believe everything you see on the internet? Fake quotes can be a lot of fun, and they get shared on social media quite a bit.

Technically, you don’t need any resources for this one. You can make up your own (taking care to make it obvious that it is fake), and post them. Making you the original source, and increasing your visibility.

But there are some good places to get those fake quotes if you want them.

Finally, I would say my favorite method of getting expert quotes to use on social media is also the most beneficial to you: through expert interviews.

You are probably always looking for new content, and by interviewing an expert you will get plenty. You will also build yourself as an authority and source for the original quote, which you can use to promote the content you have just published. Win-win!

I try and conduct an interview at least once a month, and I have loved the results.

Do you have any tips for using expert quotes to engage on social media with new and current followers? Let us know in the comments!