Panda 3.2 Refreshes: Hope for the Future? 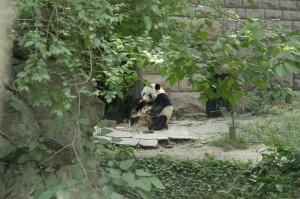 Yesterday Search Engine Land reported confirmation from Google that Panda 3.2 happened about a week ago. After a fairly long break it seemed another change was imminent at some point. But what’s interesting about this report is that Google noted this as a “data refresh”. So what does that mean?
Well, some individuals in Webmasterworld reported seeing a rebound in traffic around the time frame of the 3.2 update. Of course others are seeing greater losses or even first time traffic losses. In spite of the fact that some sites which previously passed the Panda filters are now getting caught, is it possible that “data refreshes” could also offer a glimpse of a Panda reprieve?

For most people who got slapped during any one of the previous Panda updates, there was generally a good reason for it. If a site has thin content designed to host ad sense, ok, we knew what to point to as the weakness. But for every Pandalized site with these issues, you could almost as easily find a well-ranking one with similar or worse problems. And though the demotion may be slow in coming for some sites (Panda updates have been happening in waves for almost a year now) apparently those that slipped through the early updates, are not impervious. You’d also find the rare site that, though perhaps not exceptional, seemed more like collateral damage than a flagrant offender.

Whether you were hit deservedly or not, these refreshes shouldn’t be a temptation to wait for the karma train to come around and pick you up. They should be more like a call to action for a chance at redemption.

Getting out For Good Behavior?

The thing that Panda is ultimately, if imperfectly, looking to do is find and rank the sites which have the most original, valuable content on any subject. A Panda hit is painful, but it’s an opportunity to make improvements that will, in the end, make for a better, stronger site overall. The work may be hard, and can often feel unrewarded. But this latest update could possibly be a beacon of hope.

If Panda updates are coming in the form of data refreshes, perhaps those sites that lost traffic and rankings are getting a second look. If this is the case, then it’s worth fighting the good fight.

If a site can see a rebound as a result of substantial improvements, then taking corrective measures merits the effort. Is it guaranteed? Nope. But at least we have an inkling that in going through “data refreshes” Google is attempting to acknowledge these changes.

So if we’re being optimistic, we can choose to see refreshes as a chance at Panda parole. But it requires the right course of action. Just like real jail, if you aren’t really rehabilitated, you’re probably not going anywhere.

Obviously, this is just my philosophical musing on the potential ramifications of the most recent update. What’s your take?

Click Here
If you were affected by
Panda or Penguin!