As much as I like to rag on Google when I see the occasional crap site with 100,000 exact match anchor text links from 50 domains beating sites that follow Google’s guidelines, I don’t envy them.  For one, the vast majority of sites created every day are spam and must be filtered out, but what’s worse is they’ve built such a stalwart, relied-upon brand that many people believe Google is a public service rather than a public business – a concierge rather than a corporation.

That’s why Google’s moves over the past year, but especially the past couple of weeks, to drastically change their role in e-commerce have me conflicted.  When their Trusted Stores program went live nationwide June 7th, I had to make my thoughts known.  I figure it’s best to organize my thoughts in the order in which they came to me.

Back in 1999, when Google started to gain traction, one of its major selling points to merchants and users was that their search results were unbiased and not at all influenced by money (unless you were a big brand).  Even Froogle, which would later become Google Product Search and now Google Shopping, returned results according to Google’s search technology.

They even went so far as to refer to paid placement as evil.  Sure, merchants took advantage of free listings and weren’t as on top of things as they should have been, but users could rest assured that the product they just bought was from a reputable company.  After all, Google trusted it.  Further, the merchant ranking number 2 could, with enough knowledge, determine why the site had been outranked and set to changing that.

Google announced May 31st that Google Shopping was going to a paid model.  At the time my only thought was “I hope it stops there,” but their explanation concerned me.

Ranking in Google Shopping, when the full transition is complete this fall, will be based on a combination of relevance and bid price–just like Product Listing Ads today. This will give merchants greater control over where their products appear on Google Shopping. – Google Commerce Blog

Really Google?  Why doesn’t this idea of content (product) generators having control over where they rank apply to normal Google searches?

All in all, though, I wasn’t that concerned.  The vast majority of people doing product searches did so in Amazon or eBay, so this would be a small splash in a big pond.

This bit of news had less people claiming the sky was falling, but it concerned me as I learned more about Google’s Trusted Stores program.  KikScore was a badge much like the VeriSign seal that was meant to indicate that, according to KikScore’s metrics, the store selling the product you wanted could be trusted.

The day the acquisition of KikScore by Google was announced, KikScore.com let users know via their website that the standalone seal service was no more and that, conveniently enough, Google Trusted Stores would be there for them.

I hope that, had I not seen it on every SEO blog reporting on the previous two stories, I would have seen this coming.  Trusted Stores is supposed to allow users to feel safer buying online by showing them a little GTS badge next to the result.

The user can even hover over the badge and see a report card, rating the merchant A-F (though I wonder how an F-rated merchant could have gotten the seal in the first place).  My first thought, honestly, was “Good, now bad companies can’t just buy their way to the top while having bad service without consequence.”  With a little time to think it over, “good” might have been an over-estimation.

Are Google’s Moves Good for Users?

In the short term, and for most users, I think the answer is yes.  In the SEO community, it is easy to forget that most users don’t see a site’s Domain Authority in their SERPs.  Many people will praise Google, benevolent public servant that it is, for helping them decide what’s what in the intimidating internet space, and for good reason.

The plot thickens when you look at a normal, organic search for a generic product.  A person in, say, Manhattan, looking for a kayak will see this in their SERPs. 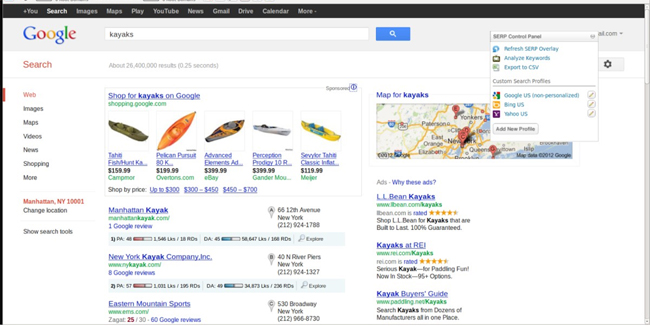 A busy page, sure, but with enough options to make a sound decision, but not so many as to be overwhelmed.  The user assumes via Google’s rankings that the sites they are choosing can be trusted.  Once the GTS badges are put in place, they no longer even have to make the assumption.  Google tells users who they can trust and, by omission of the seal, who they can’t, and I believe people will welcome the simplicity.

Are Google’s Moves Good for Merchants?

Yes and no, and mostly no.  Sure, you’ll probably keep a tighter grip on exactly what’s listed in Google Shopping than you did with Google Product Search, so that’s good.  Heck, if you’ve got the cash, you can buy your way to the top, which, for those with the means, is good too.  But let’s take a look at that SERPs page again.

First, there is the normal sidebar of ads.  No big deal there, and at least it’s not at the top pushing the organic rankings… wait a minute!  There’s that big ole banner full of Google Shopping results!  This means two things are different now.  First, the #1 ranking for kayaks means less, as it’s found way below the fold, beneath Google Shopping and 8 local results.

Second, it means Google, by their own definition, is more evil than ever.  I did not do this search in Google Shopping and yet Google Shopping results are the first thing I see.  So if I want to show up at the top of Google’s listings for kayaks, not only should I probably keep paying AdWords (they show up above the fold, after all) but I better up my budget in Google Shopping, thereby paying Google twice for the same service.  And I better get a Google Trusted Stores seal, because not having one means I can’t be trusted.

All of a sudden organic search, which enough Pandas and Penguins have shouted from the rooftops is vitally important, is only valuable in that, if you paid enough money, you could show up three times on the first page.

My issues with this whole thing are two-fold.  First, don’t we have reviews online?  Aren’t customer reviews already telling us who to trust, and aren’t they doing as good a job as Google (which could surely never have its grading system manipulated by those disreputable SEOs) ever could?

Second, this model entirely changes the group Google is accountable to beyond their shareholders, and I have no faith that they will readily lie in the bed they have made for themselves.  Now, with organic searches yielding almost entirely paid results above the fold (did I mention this is the case for pages 2, 3, etc. for the search?) they become more of a service provider than ever.  Sure, they still hold most of the cards (what are you going to do, leave?) but they are opening the door to cost businesses money in entirely new ways, and when that door is opened, it leads to another door marked “Competition…” something they claim to be okay with… but somehow I doubt it.

So is the sky falling?  No.  Is the weather changing?  Definitely.