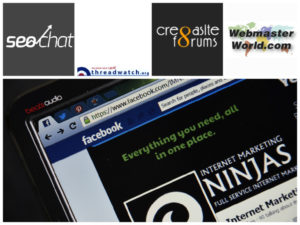 Beyond that, there was some interesting discussion around Apples switch to from bing to Google as the search engine for spotlight and Siri.

View full discussion here
Twitter  announced that it is testing upping the twitter character limit to up to 280 characters.

We’re trying something new with a small group, and increasing the character limit to 280! Excited about the possibilities? Read our blog to find out how it all adds up. ?https://t.co/C6hjsB9nbL

Over on Webmaster World the sentiment seems positive or neutral on the change but over on CEO, Jack Dorsey’s twitter – long time users were not keen on the change and felt that the character limit was part of the essence of what Twitter is. Jack Dorsey responded to the criticism with the following:

We expected (and ❤️!) all the snark & critique for #280characters. Comes with the job. What matters now is we clearly show why this change is important, and prove to you all it’s better. Give us some time to learn and confirm (or challenge!) our ideas. https://t.co/qJrzzIluMw

A lot of the discussion on Webmaster World surrounding the switch was why Apple has not tried to buy a smaller search engine or build their own. One member commented seeing Applebot on their servers for a couple of years.

Some of the changes highlighted as part of the new Adwords Terms and Conditions include:

On Webmaster World the discussion was around how users don’t ever read terms and conditions. Also, it was noted that with ‘deep enough pockets’ arbitration clauses can be challenged.

Over on SEOchat, a photogprapher asked about the best way to link back to her site from Facebook, without being spammy.

Member Mike Hoklin provided the following advice,
“This is what I do. When I come back from a trip (like I’m doing tomorrow), I post the photo on my blog with the details. Then I create a new Facebook Page entry with a short teaser and/or title of image….something like that. The paste that copied link into that FB entry. I usually share that FB Page Entry into my personal FB account and some of the FB Groups I belong.”