For years I have wanted to write about how playing fantasy sports has helped me to be a better objective consumer and user of analytics to drive marketing decisions, so here we go… 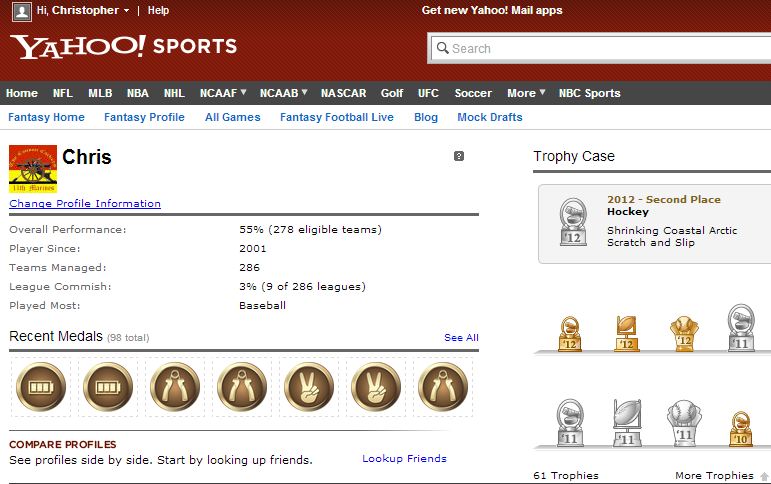 Fantasy sports is something I first heard about back in the 1980’s, when some friends began playing Rotisserie baseball (named after a restaurant in NYC believe it or not). As described in the history provided by Wikipedia contributors, the point is to take real-life players and assemble them onto a team, which you then manage against a group of other such teams. Many people play for money, throwing a fee into the pot and splitting winnings among top regular season and playoff winners.

Some would say I am a true fantasy sports fanatic. My profile at Yahoo! demonstrates that since 2001 I have managed over 280 teams across a number of sports, including mostly football, hockey, baseball, and golf. Yes, there is fantasy golf. You will note that I haven’t won much in a while, because frankly I haven’t had the time to put into it. There are many reasons that I play fantasy sports, and most would be surprised at the complexity of the managerial decisions being made on a weekly basis.

Over the years, I have developed two major analogies between internet marketing and fantasy sports, and I hope they will somehow benefit our readers. Please bear with me through some of the setup required for those that don’t understand fantasy sports

I have to play Fantasy Nascar, as part of a super league I am in. I don’t follow Nascar – not that there’s anything wrong with it. I also don’t really follow the NBA, and frankly outside of the really big names who knows all the players in any of the big sports? This is why stats are so awesome. I don’t even look in the name column, but rather at numbers, when making decisions. One would think it’s pretty easy to determine a player pickup: you look to improve in one or more statistical categories and find players that are available to fill those spots.

Drafting a new team at the beginning of any season, which you have to do for team sports, allows you to take turns picking the best players that everyone knows, in a fair order. This is easy compared to adding players during a season, to replace poor-performers or injured starters. The simplest step to begin to do, as with internet marketing, is to sort your data appropriately. In the screenshot above, the data is ordered by “Overall Rank.” This is often a red herring for newer players, before they begin to use stats that are actually meaningful. If you are sorting and making decisions based on metrics or keywords that are historically “top players,” then your tactics won’t be as effective as when you begin to sort by more meaningful ways.

For example, the above screenshot shows two further filters or sorts that I made on the same available player list from above. First I changed the players’ performance period is reduced to the last 14 days versus the whole season, and second I changed the rank to current rank versus overall rank. The results now look much more appealing, in terms of the players available in this league. I often like to use 14 days, but you can also use 7 or 30, or even switch to previous seasons or overall lifetime stats if you wish. If I wanted, I could also sort by Home Runs, Stolen Bases, etc, based on what I need.

Looking at your marketing analytics is exactly like this, in my opinion. In the above sorted example, you will also see a questionable data point: one player is ranked highly over the period but had an abysmal .125 batting average. In this case I am very curious as to the current rank, given the performance numbers of the others in the list. I hope you can see what I mean by “stats don’t lie?” I think in this case exactly with internet marketing you have to take advice from the famous Russian proverb borrowed and made famous in North America by Ronald Reagan: “trust but verify.”

Internet marketers know all too well the perils of “analysis paralysis.” Especially within seasonally-affected product and service suites, taking too long to make a decision can be perilous. In fantasy sports, one of the biggest things that can bring a team down is highly-paid superstar flops. Every year one or more players that are destined for greatness according to sports writers and experts, fall flat on their face. Often, since people trust the past performance of a player, they keep him on the team. This will drag a team down the standings at the same pace that keeping past performing keywords or advertising creative.

In the above example looking at the numbers sorted by clicks will tell one story, but simply because keyword 2 always gets clicks, the conversion rate must be added to this calculation to ensure that the word is still performing to the standards. Having an unreasonable attachment to a keyword or an add unit that did well in the past amount to throwing money away in today’s paid search landscape. The same applies for organic search traffic.

Pulling the trigger means acting on decisions quickly and for the benefit of the organization, without prejudice. In the above examples I have focused on team sports, but in fantasy games like Golf and Nascar, you have to pick new players each week. This brings a whole new level of research to play. Questions like how well has the player performed over the last month and at the particular golf course or race track will lead to choosing better players. If internet marketers look at it with this level of granularity, campaign performance is bound to increase.