Social Communities: How to Talk Without Causing a Riot

In person, we judge people by what they look like. Online, we decide what we think about someone by what they write. Both can be deceiving.

Last week I wrote that I don’t think social communities are really “social” and nobody disagreed with me. I’m sure many readers do but for whatever reasons did not leave comments. Maybe they didn’t want to use the comment form. Maybe they are lurkers. In larger forums, lurkers come and go and we never have any idea what they think or feel about the discussions. Maybe some people are afraid to respond to online discussions because of a variety of fears that go unaddressed.

Fear is a big reason for not communicating on the Internet. What are people afraid of? They fear sharing too much information. They lack confidence in their own voice. They are deeply afraid of search engines tracking everything they say. Writing is not their best way of communicating. People can be mean if you make a mistake.

The following are guidelines I developed from 17 years of being moderating, owning and being a member of chat rooms, email lists, UseNet, groups, clubs and forums. Have I broken my own rules? Yes. And whenever I did, I regretted it.

How to Write for the Social Communities

1. If you want to get someone’s attention, whisper. This approach is powerful and marketers hate it. The marketing game says, “Join all forums, set up a profile and drop a bunch of one-liner useless posts so that people and engines will find your profile. PS. Post to old discussions.”

As a forums owner who works with other forums owners, let’s clear the air of this. You may get away with this on forums that don’t get traffic and exist only to host ad-sense ads. For legitimate forums with real communities, actions like this are our equivalent of target shooting. Your profile is our clay pigeon. Your posts are shot down on sight and your user name, email address and in some cases, IP are banned. This is our fun part. What you don’t know or don’t seem to notice is that your profile isn’t “live” and available to the community or engines.

The way to converse online is to start quietly and with respect for the community and its rules. Rather than galloping on your great white stallion shouting how much of an expert you are, prove it over time by getting involved with your community of choice. 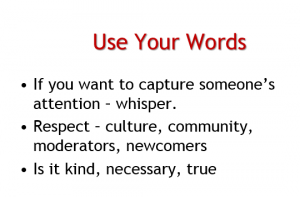 2. Respect the culture, community, moderators and newcomers. It’s been over 5 years since I’ve had to ban a community member at Cre8asiteforums. Since 1998 there may have been about 5 or so truly banned members and they were also banned from other forums. What did they do? They were rude to everybody in the community. They had no respect for the rules of the community and disregarded moderator warnings. I believed in working with difficult members because often it’s not them, but how they write that’s the problem. In private PM’s I could work out rough areas with a troublesome member but when they would return to the community itself they lost control again.

I learned from this that not everyone should join online discussion groups. Under the cover of being anonymous it’s easy to argue and even take on a personality that is nothing like you are in person. Some of you have to be right about everything. You don’t care about other perspectives because to you, we’re all wrong. To you we are mush brained low lives who don’t deserve to be working in our fields because we’re not experts like you are. You love to call us names and make us feel badly. Being part of a community is not part of your game plan. Disrupting the communities you join is.

Every community has its own way. Some are more tolerant than others. Some are for beginners while others can’t stand newbies. To avoid being a loser, always take the time to get to know the community you are thinking of joining. Forums don’t pay their moderators and administrators. Those roles are performed by volunteers who love the community and care about it. Disrespecting them is your way of indicating you don’t want to belong.

3.Is it kind, necessary, true? This is ancient advice for any kind of dialog and especially useful for social communities on the Internet because whatever you say is going to live on forever and ever and ever. I’ve broken this rule. The last time I did I swore and got into a cat fight on someone else’s web property. Some people will joke around and tell you to “step away from the keyboard”. I was so mortified that I lost my cool that I lost confidence and thought for sure I destroyed my reputation.

The rule of thumb is solid. The proof is at Cre8asiteforums in our members-only pub where I launched a discussion on gun control. It’s now at 8 pages and still active. At no point did anyone lose their cool. With members around the world, opinions are all over the place and yet the entire discussion is extremely smart, respectful and thoughtful. In years past we were able to pull off political discussions without any riots. Facebook can’t even do that.

No matter where you go online, if there is an opportunity to provide feedback, always take the high road. Whether you submit reviews, participate in discussions, leave blog comments that are not spam, converse in Facebook and Google Plus or speak in “hash-tag” language, be nice about it. Be fair. Use humor. Don’t hijack the discussion. If the host has potty mouth, this doesn’t mean you have to if this isn’t really who you are.

You read that right.