I used to have some fun with Reddit ads and get a pretty good ROI, mostly due to their pricing model, but now that the model has changed, I anticipate that the ROI will be dramatically lower. They now charge $0.75 CPM. 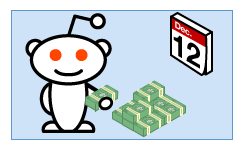 Reddit’s new ad pricing will make advertising there far more expensive, and ultimately hurt Reddit by preventing them getting a greater volume of business and more repeat business.

The pros and cons to this approach, from the advertiser perspective, were as follows.

No matter what part of the site you advertise on, it costs $0.75 CPM. Considering that a great CTR on the site still doesn’t get to 1%, that means you’re paying about $0.80 to $1 /click if you’ve got a great ad. And if you don’t – like most advertisers who start out by testing the waters  and then refining – then you’re really looking at $2/click if you’ve ‘merely’ got a good ad.

What this means, in other words, is that Reddit has shot itself in the foot. They have just done the equivalent of making you go through airport security to advertise successfully on their site. You need to spend a lot more to just to get started. This obviously will keep out smaller fish, which means that Reddit won’t get the benefit of seeing them grow into larger fish who buy more ads on their site over time.

More friction = less advertisers. As Facebook and Google have shown, an auction model with more advertisers is ultimately the path to success.

StumbleUpon is still selling traffic starting around $0.10 and up – for an actual, nonbounced visitor. My above reference to getting Reddit traffic at $0.03-$0.15/click includes the bounced visits.

Or consider that traffic on Reddit now starts at ~$2/click and that the targeting and audience are way inferior to LinkedIn’s ads (which won’t include extra-hard-to-convert high schoolers), which also start at $2/click. Not to mention that the bounce rate from LinkedIn is likely lower.

You can make similar comparisons as well vs Twitter ads or Outbrain etc.

This final comparison point should put the nail in the casket: retargeting on AdRoll starts at $1 CPM, or only a slight premium over Reddit. Yet average ROI for AdRoll’s advertisers is $10 to $1. Can Reddit claim anything close?

If I were Reddit, I would change my pricing model to make things way more affordable and attract a wider range of advertisers. I’d also avoid the CPM model, because if advertisers are paying per impression, you’re still leaving your platform open to garbage branding ads that don’t lead to repeat sales for Reddit.

Charge people per click or even per conversion and make money in partnership with your advertisers. The web has proven that sharing risk between publisher and advertiser is the best ad model. In that case, advertisers have lower risk to enter your market, giving them time to figure out what works, and then they can optimize and stick around. Make it too expensive to buy that initial runway of data and they’ll never take off.