This Shady Trick Lets Unethical Marketers Steal From Others … When Will Facebook Fix It?

Facebook’s ad pricing tests the ethics of a lot of marketers, by offering them big CPC discounts if only they’ll scrape others’ Facebook pages for user ID numbers. 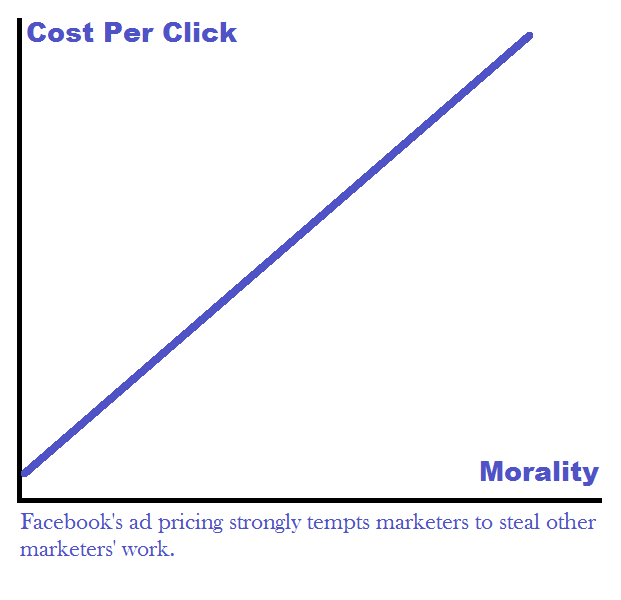 Facebook ad pricing strongly tempts marketers to scrape the audiences of other pages in their field, so as to benefit unfairly from the money spent by other marketers to acquire an audience and instantly steal those marketers’ most active fans.

I heard about this tactic in private discussion with a very savvy internet marketer. What happened is as follows.
1. First, Facebook created an ad targeting method called “custom audiences” whereby you can upload a list of emails, phone numbers or Facebook user IDs (UIDs) and  target ads to users with corresponding emails, phone numbers or UIDs.
2. Second, marketers realized that they could scrape Facebook fan pages for user IDs (i.e. those users leaving comments and likes) and find active fans of pages in the same industry.
3. Third, you upload those UIDs and claim that they’re your own custom audience and
4. Fourth, Facebook gives you really cheap clicks. It’s not clear why they’re cheap. It might be that Facebook gives a discount merely for using custom audiences (what some people imply in discussing this). Or it’s because these are the active fan page members and they are thus more likely to interact with ads by clicking like, share, comment so you get cheaper clicks etc.

“If you have not collected the data directly from the data subject, you confirm, without limiting anything in these terms, that you have all necessary rights and permissions to use the data.”

Jon Loomer recently discussed the ethics of this, but his post is focused on an earlier sentence in the TOS that requires people who collect the data directly to have obtained consent from Facebook users. That’s a moot point, because nobody’s getting direct permission from Facebook users to target them with ads (duh!). That line in the TOS is just Facebook’s legal department covering Facebook’s backside.

The point I want to raise is about the ethics of indirectly collecting these UIDs. The problem that I see is that you’re freeloading off another marketer’s efforts and ad spend. They paid to acquire these fans, comments, likes etc. And you come along and steal their most active fans, with the implied hope that they’re also the most likely to become good, paying customers.

And Facebook’s TOS here prohibit that kind of freeloading. What rights and permissions do you have at all to someone else’s fan data?

The only way I can theoretically see this being acceptable is that you make a deal with the page owner to scrape the UIDs of active members. Good luck finding a sucker willing to sign away their best customers.

The devil’s advocate in me wants to say that the competitor fan page owner doesn’t own any rights in the data either. Facebook does however say something about Customer Audiences that implies the opposite:

In other words, they promise not to share your ad audience (and we can easily see how this extends to fans) with other advertisers. Scraping the UIDs is basically a violation of this.

Separately, it also violates Facebook’s TOS to scrape their site. It’s less of an ethical concern, however, as you could say that the intent there is to protect their server resources and you’re doing it in a way that benefits them by generating ad revenue. The main concern, in my humble opinion, remains freeloading off someone else’s efforts to build an audience on Facebook.

So it’ll be interesting to see what happens when the first lawsuit over this arises. I think a reasonable judge would rule against the Facebook UID scrapers, and I think further that ethical marketers won’t use these scraped UIDs. Until Facebook clarifies/removes the incentive to do so however, many marketers will be tempted to the dark side…

If you think I’m right, wrong or otherwise misunderstand what’s going on, please leave a comment or Tweet and argue your case!

I’d also love to hear how you think Facebook can fix this. Should they change their pricing not to favour custom audiences? It seems that when these are legitimate, these audiences should get cheaper pricing. Should they block scrapers / not enable UID targeting? What’s the right solution?