This past weekend was the wild and crazy ScarySEO Mini-Con in Deerfield Beach, Florida. Pat, Rhea, and myself were all lucky enough to make the trip down to hangout with Dave Snyder’s gang and we were not disappointed. In fact, Rhea had so much fun she’s not even back yet!

And while there were lots of funny moments at the event, the highlight of these small shows is always the high level of learning that erupts when a small group of SEOs are left in a room to talk it out. The mini-con, unconference theme is all the rage in SEO these days and there’s reason for it €“ attendees learn more, network better, and come away a whole lot smarter when the focus is on sharing information rather than inflating egos.  Save your elaborate search engine-sponsored bashes and clumsy networking receptions, let’s just come together to talk about search.

If you didn’t attend ScarySEO this time around, you missed out on some great conversation and learning. Here’s a glimpse at what everyone was raving around the morning after ScarySEO:

Speakers Who Interact: One of my biggest complaints about some of the larger industry shows is that too many of the speakers are on Rock Star Autopilot. At the smaller shows, the attendees are the stars. Egos are left at the door and everyone shows up with one goal in mind: To leave smarter.

The most impressive part of ScarySEO was the high level of interaction between speakers and attendees. My favorite session was on SEO Project Management and Educating Clients where speakers Pamela Lund, John Carcutt, and Chris Hart really took the time to speak with (not at) the audience. They didn’t just rattle off a cold Powerpoint presentation, but instead gave folks actionable takeaways, stuff they could immediately work on to make their company better and to increase ROI. The presentations were great (especially Pam’s!), but the true strength of this session came when they were finished presenting and were simply talking with the audience. It was a big group think led by the speakers and moderator Dave Snyder. I’m not sure if it was because the session was happening late on the second day or if drinks started early, but the attendees were especially vocal, jumping into the conversation and adding real insight and thought. And the speakers played off them. I was blown away by the level of some of the questions being asked and the willingness of the speakers to really go in depth and share knowledge. That’s something you just don’t see at a larger show. It brought life to the show and value to everyone.

Invested Attendees: You don’t attend a mini-con because you want to fade into the background and this is something ScarySEO addressed very well. Even though it horrified me a little at first. I’m serious. Imagine how terrified my anti-social self was to walk into the ScarySEO mini-con only to find attendees seated at round tables. Round tables where people can look at you. And talk to you. The horror!

Had Rhea not been there to hold my hand it is very likely that I would have sat underneath one of said round tables so that no one could see me. However, by the middle of Day 1, I was a believer.

While the initial thought of having to interact with my peers terrified me, it seems the boys of ScarySEO were on to something. The format set out by ScarySEO sparked lengthy table-side discussions about real-life problems. Being able to converse in small communities added to the knowledge transfer and tge networking that took place at the event. Even more, Dave and Jordan blocked off the last 20 minutes of each session so attendees could specifically take advantage of group time. Attendees were also asked to sign an NDAs so that no one was afraid to reveal “too much”. I can honestly say that the small block of group time where tables worked together to talk out problems was one of the most valuable parts of the entire show.

Brand Evangelists Emerge: You know who my favorite people at the big corporate shows always are? They’re the ones with approach you wearing a big grin and who want to be your very best friend. Only they don’t actually listen to you or even ask you your name. Instead, they launch into a pre-recorded sales message about how awesome their product is and how you need it in order to live.

Wait, my bad. Those are actually the people I want to run over with my car. The ones who couldn’t have a genuine conversation if the state of their business depended on it. And really, it does depend on it.

Small shows give companies the chance to talk about their product in a real way. One the biggest stars of ScarySEO for me was SEOmoz’s Scott Willoughby. I was lucky enough to sit at Scott’s table on Day 1 and I watched him interact with many ScarySEO attendees. I’ll even admit to eavesdropping as folks approached him about Linkscape, referencing some less-than-favorable details they may have heard elsewhere on the Web. Stuff that had previously overshadowed the conversation and had zero to do with the actual product. Listening to Scott honestly answer questions, address concerns, and altogether bring relevance back to the Linkscape conversation was impressive. But more than that, it was powerful to the brand of SEOmoz. When you send your team members into a small arena like that, they have the chance to connect with people and give a face to your company.  And when you have someone like Scott, who is genuinely passionate about the company and the product he had a hand in developing, the branding of that is incalculable.

Better Networking: Attending SES is a bit like having 5,000 kids in your high school graduating class. Sure, there’s lots of potential for new friends and lifelong connections, but after four years, how many of them have you really spoken to? And how many do you really know? Ten? Twenty if you’re lucky?  Maybe it’s because I went to (a snotty) private school, but I’ve always appreciated smaller learning environments.  Where your graduating class is made up of only 100 faces and you know each face by name. That’s what conferences like ScarySEO can provide. When I showed up to ScarySEO, the only people I knew were ninjas and a handful of Twitter folks. It was the first time in ages that I was at a show where the faces weren’t familiar. It was scary at first (especially with those darn round tables!), but three days later I suddenly have a whole new set of friends. People that I actually got to know and learn about. I was able to form the type of contacts that I’ll be able to call upon later when I need some help, which are the exact type of connections you want to be making. It’s fun to attend big events like PubCon or SES, but often they turn into a race to see who can collect the most business cards. Forced relationships don’t last. Smaller conferences with a capped number of attendees give you the ability to spark genuine relationships. If only  because there’s more time to get to know everyone and bond over silly faces made to the camera.

New Conversations: How many times have you looked at a new conference schedule and realized that there’s nothing new on there at all? Conference organizers often don’t even change the session titles, let alone the content. Small shows don’t have the luxury of repeating content, nor do they want to.

As I mentioned above, my favorite session at ScarySEO was the session on SEO Project Management and Educating Clients. Dealing with difficult customers and trying to manager education levels is a huge battle for SEOs. We all know that an educated client is a better client and that some clients aren’t worth keeping, but how do you put that into action? In this particular session, Pamela Lund, Chris Hart and John Carcutt were able to take the gloves off and really dive into the topic to give attendees some great lessons. And it’s a session I don’t think I’ve seen anywhere else, or at least not presented in that much detail. It’s probably worth nothing that Chris and Pamela were both first-time speakers. And they both delivered big time.

If you’ve been sticking to the big name industry shows because you think they’re more “trusted”, I’d really encourage you to branch out and try some of the smaller, topic-specific events.  If they’re half as good as ScarySEO was, it’s definitely worth your time and your money.

A big congratulations and lots of hugs Dave Snyder, Jordan Kasteler and everyone else who teamed up to put together ScarySEO. It was a stellar event that gave back to the community tenfold. More thanks to Dana Lookadoo for acting as the official photographer of the event, and of course to ScarySEO’s unsung hero, Samantha Snyder. Between taking care of the two young Snyder boys, making sure no detail slipped through the cracks, and acting as the Den Mother for the event, the show wouldn’t have been the same without her.

Thanks to everyone for all their hard work in putting this show together!  The ninjas at We Build Pages had a great time. 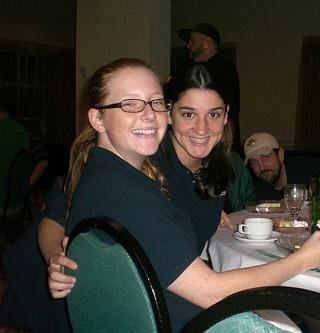