Perils of Penalizing the Pure and Pristine: A Google Tale

I have long been an advocate of the great things that Google has done not only for improving the ability to search for information, but also for the hundreds of thousands of people in the world that enjoy gainful employment as a result of the search engine marketing industry. Today however I have to take some time to examine one of the flaws that is evident in the way that Google is grading and penalizing Web site owners for real or perceived search engine optimization link building tactics.

Let’s say my car license plate gets stolen, and the driver using it on another car gets involved in a high speed chase, subsequently escaping. What would you think if the district attorney came after me and a judge immediately suspended my right to drive? Now, then let’s imagine the only way I could get my driving privileges back is by finding the guy who took the license plate, and asking for it back. If the thief didn’t comply, I would then need to prove to the D.A. that I had asked nicely, but still hadn’t been able to get it. Then I would get my driver’s license back.

Sound absurd? That’s because it is. Unfortunately, this is very close to what is happening currently within Google’s complicated site reconsideration request process.  I have a friend who manages some Web sites and one of them was sent the dreaded unnatural links notification within Google Webmaster Tools. 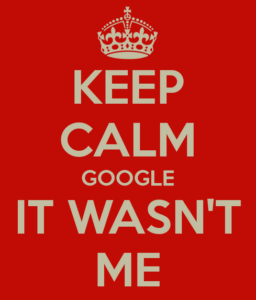 Imagine trying to decide exactly what links are “unnatural” (Jim did a fun quiz on this topic back in 2008). Then imagine penalizing a Web site because it had links pointed to it that seemed unnatural. To get back to the analogy about the car license plates:

Imagine if someone stole your site content, which contained links within it that pointed to other pages on your site, and posted it on another domain. Now, imagine being given an example of a bad link in your reconsideration request communication with Google and it IS ONE OF THOSE LINKS within your content that was stolen!

This really happened. In fact I Tweeted about it and others had seen the same thing. Scrapers who steal your content and post it on site that seems bad in Google’s eyes or perhaps across enough sites to cause suspicion, can directly affect unnatural link counts.  This is nothing new, but it has been kept rather quiet, based on some searches for this topic. I did find an interestingly detailed example with more hard questions that has gone unanswered at Google’s Webmaster help area for nearly a year. From that:

“We’ve never participated in a backlink program, are constantly battling content theft by sites who steal our copyrighted work or include our RSS feeds without permission, and truthfully have never considered page rank as being important because we rely on organic search and social network distribution to have our work seen.”

This isn’t just an issue for scraped content – Naylor drew the connection between the perils of this classification and RSS feeds as well. Does this mean that every Webmaster that has set up an RSS feed could be subject to a “bad site” publishing the content? If so, this is pretty bad for Google’s unnatural link penalty system and frankly they should strongly consider going back to the drawing board. At least make rules that prevent your own content from hurting you!

According to Naylor, the Disavow tool is not the answer to handle this situation, per his testing. This makes sense since it is known that the disavow tools only works for Penguin-ized (penalized through algorithmic means) links, and not to help with unnatural links as specifically called out via a Webmaster Tools letter. The next question for practioners of “negative SEO” is obviously “how can I do this to my competitors?” I welcome more examples in the comments below.

Google is becoming increasingly transparent in the decisions they are making and are going even further in trying to help Webmasters help themselves out of a hole. Part of transparency is that sometimes you can see kinks in the system. Please Google, give us a way to get around this?