My Love/Hate Relationship With Marketers

Like a link ninja, I, too, lead a double life.

By birth, I’m a 20-something addicted to social media. I’m am connected to Twitter every second, I log in to Facebook 2-3 times a day, I Stumble, I Reddit and I altogether have no life because I’m too busy writing about my life on all the social media platforms.

By trade, I’m a marketer. I know the power of social media sites. I know how important it is to leverage communities and to build brand and attention by word of mouth. I’ve seen what can happen when you do social media right. I know the thrill of the kill. I get it.

The problem I face is that my two personalities often conflict. The 20-something in me wants social media to be pure. I want to be able to trust that everything I find on Reddit is there because the community put it there, because they find it valuable. I want to be able to trust that the relationships I’m forming are authentic and genuine.  I want to know that the person I’m interacting with is not a robot designed to be my friend and feed off my insecurities and my need for community approval.

The marketer in me thinks that 20-something described above is nothing but naive. The marketer in me still isn’t okay with fake avatars, but understands the fine line between selling a product and selling your soul. My marketer personality is willing to toe that line to get the word out and help clients find success.  It knows how powerful it is to have brand evangelists and community-think on your side. I know the links, attention and branding social media can bring.

And this has caused a constant struggle in my brain, especially when services like Be-A-Magpie are released. 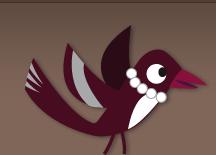 If you haven’t seen it yet, Be-A-Magpie is the newest pay per post idea. Here tweeters are paid on a cost-per-thousand basis to insert ads into their Twitter stream. Be-A-Magpie analyzes your Twitter stream for keywords and then delivers ads in your name, on your account. The service will auto-determine the number of ads to place in your Twitter stream, but users can change it if the default (one ad for every five organic tweets) is too much or too little. You basically get to decide how much of a sellout you’d like to become: Enough to buy a cup of coffee or enough to make the audience who once respected you start spitting in your general direction.

While the marketer in me sees the effectiveness of a service like this, the 20-something wants to kick it in the face until Be-A-Magpie takes their slimy third-party service and gets out of my Twitter. (What? Too much?) You see, for me, when it’s battle between marketer and 20-something, the human 20-something part of me always wins out.

The human Lisa genuinely hates this idea. Probably because I care and invest too much in the communities I belong to. But my Twitter feed is me. It’s authentic and it’s genuine. If you follow me on Twitter (bad marketer, bad!), you know that. I share it all. For me to start putting ads in there and taint the waters is almost offensive. And I don’t like the idea that I’ll now have to question other people’s motives. Did they really like that movie or was that a for-pay tweet? Was that really the best Mexican place they’ve been to EVER or did they just sell their soul a little bit? There’s some solace in the fact that all for-pay tweets will contain a #magpie hash tag but how much do I trust that it’ll stay there? Not too much. And it’s still going to make me question people’s agenda. Don’t make me question you. I get enough of that in real life.

And why the #magpie hash tag? Is it so that the Twitter audience can identify tweets that you were paid for or is it really there with the hope that it’ll keep #magpie on Twitter’s trending topic list? See how you’ve already made me question you?

Obviously, the stance I’m taking here is nothing new. Many of those who are passionate about social media are not a fan of systems like these. Social media expert Jeremiah Owyang conducted a test of Be-A-Magpie to see how his audience would respond to it. He was kind
enough to share the results with us:

Fifty-five person of those who responded had a negative reaction. Seven were so offended they unfollowed him.

As a 20-something who cares about the communities I play in, I don’t want ads in my Twitter stream.  As a 20-something who is also a marketer, I don’t want ads in other people’s Twitter streams. I’m not naÃ¯ve enough to think that everything someone posts or links to is a real vote, but I’m not willing to open things up even more, either.  I also don’t like the idea of a third-party company coming in and trying to invade Twitter like they created it. Social media used to be about finding interesting things and sharing them with people “like you”. Why do marketers always have to come in and ruin everything for the rest of us?

There’s lot of discussion about the ethics of Magpie happening on FriendFeed, and of course, Twitter.